You are here: Home » On Line Obituary » 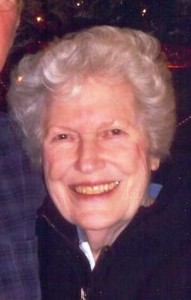 The sixth and final child born to Homer and Jennie Belshee of Moro, Oregon, she had the distinct honor of being their only child birthed NOT in a humble bedroom at home, but at modern Mid Columbia Hospital in The Dalles. Though one sister had died in infancy, four delighted older siblings received this bright-eyed, copper-topped doll into their midst and pampered her attentively. Arthur, age 14, and Russell, age 12, already worked long days on the family farm alongside their father. Winnie and Betty, ages 7 and 5, rode horses and herded cattle, but little Leila, with her halo of red ringlets and infectious smile was unanimously deemed the most beautiful child in the family and too special for hard labor. She was allowed a childhood of relative luxury, for as her father declared, “we already have boys and tomboys in the family–Leila is to be raised as a lady!”

Harmony School, a tiny country schoolhouse on the outskirts of Moro, set the scene for Leila’s formal education. With eight grades in one room, excellent teachers, ink-dip pens, the “Palmer Method“ of handwriting, and her siblings to keep her company, she loved school. The children studied hard and played even harder, returning from recess red-cheeked and breathless from “Red Line” and “Steal Sticks” and other rousing games. Though other students rode their horses and stabled them in the barn provided, Leila and her family walked–or, rather, RAN the shy mile from their front door to the school house, as they always seemed to be LATE and had to run for the bell. . . . Now isn’t THAT a telling bit of family history!

In 1935, at the age of eight, Leila moved with her mother, Arthur, Russell, and Betty from the farm in Moro to the ‘big city’ of Corvallis, Oregon. While her older siblings completed high school and attended college, Leila launched into what became one of her signature passions: music. At nine years of age she walked across the street, down one block, and into her first piano lesson. As a teenager, long before graduating from Corvallis High School in 1946, she held the position of most accomplished organist and pianist for the First Baptist Church in Corvallis. She went on to attend Westmont College in Santa Barbara, California, and graduated in 1950 with a major in music. Despite seventy-plus years playing, teaching, leading, directing, and enjoying piano, organ, and choir, Leila still claimed her abilities did not come naturally. “I don’t have a gift for music,” she would say, “I have to work for it!” And work for it she did, as those who heard her pounding the keys late into the night can attest!

While at Westmont College, a quiet, handsome, young man stole Leila’s heart and became the love of her life. Long hours washing dishes and mopping floors in the kitchen gave opportunity for Harold Earl Free to admire Leila’s beauty, confidence, and capable leadership in her role of Cafeteria Student Monitor, and for Leila to discover his sensitive, authentic depth of character. Once ignited, sixty-three years of marriage dimmed not that passionate flame; thus, she tenderly cared for him through these past ten most difficult years, and before she died Hal held her hand and said of her, “She is the only woman I ever loved.”

Leila loved babies and determined to have as many of them as she could. After their wedding in 1950, Kurt was born in 1952 and Kathy barely a year later. Drafted into the army during the Korean War, Hal and Leila moved to San Antonio Texas in 1954, then on to Connecticut where Hal completed his Master of Social Work degree. Leila’s “Social Work” involved adding babies Polly (1956) and Craig (1957) to the growing family, carefully evening the gender score. A move to Maine provided opportunity for Hal to start the Mt. Desert Child Guidance Center and for Leila to guide child number five, Carol Joy (1960), into the world. This new arrival upended the delicate gender balance and an increasingly long string of girls soon followed: Holly (1962), Julie (1964) and Jennie (1968). By the time Cliff arrived in 1969 to add ballast on behalf of the men, Kurt jumped ship and left for college.

The family settled for good in Oregon with moves to Norwood in 1961, then over the Tualatin River and through the woods to Scholls in 1969. It was then that Hal and Leila’s vision of providing a safe place for all to gather came to fruition as they christened their beloved new home, sheltered by the grove of trees, “Fir Haven.” A hostess and caretaker extraordinaire, Leila provided a warm and welcoming home-away-from-home for international students, youth groups, college-bound nieces and nephews, relatives from near and far, friends, boyfriends, and total strangers. From the hidden recesses of cupboards and attic pantry she miraculously produced perpetual and delicious meals–cakes, cookies, pies, rolls, and raised doughnuts hot from the fryer, while simultaneously housing, chauffeuring, laundering, parenting and entertaining expected, unexpected, and oblivious offspring and guests alike. Surely in light of all that, she can be forgiven for the odd time or two a child was inadvertently left behind at church or to wait in vain at the Activity bus stop.

In addition, Leila took upon herself the quiet, personal, lonely hospice vigils first for her precious mother-in-law, then her own dear mother, caring tenderly for them in her own home until they died. Those who were hungry, she fed. Those naked, she clothed. And those suffering, she comforted. How often after long, busy days could she be found late at night sitting at the kitchen table, her worn and dog-eared Bible open before her, studying the Scriptures for answers to the myriad spiritual needs round about her, preparing words of encouragement for speaking engagements at Christian Women’s Club meetings, various retreats, and Vacation Bible School programs. Faithfully attending Scholls Community Church, she invested countless hours over multiple decades as pianist, organist, and choir director, as well as organizing and chairing the Circle of Love Committee which provided assistance and comfort to families facing difficult circumstances.

What did Leila love? She loved hummingbirds–ANY birds except those rascal thieving blue jays–bird feeders and flowers. Almond Roca, Aplets & Cotlets, burnt peanuts, milk toast with pineapple, salmon, and filet mignon; a perfectly down-to-the-penny balanced checkbook, finding a super bargain (especially on fabric!), and watching the Trailblazers WIN on TV; reading aloud to her children in bed, family musical entertainment, Nelson Eddy and Jeanette McDonald movies, her grandchildren’s artwork; kerosene-scrubbed walls, starched bed sheets and pillow cases, and ironing EVERYTHING; sewing, quilting, flower gardening, canning, cooking, and spanking a whole line-up of potentially errant children, oldest to youngest, to make sure the culprit was covered. Leila loved best of all the Lord Jesus Christ, her husband and home; and each and every one of her children and grandchildren can individually and emphatically say, “She loved ME.”

Leila Jennie Belshee Free has passed her gracious and nurturing heart on to the next three generations. . . and counting. She is survived and greatly missed by her husband, two older sisters, nine children, twenty-two grandchildren, and nine great-grandchildren, as well as all those sons and daughters who married into the family.