You are here: Home » On Line Obituary » Lucile Irene Lashbrook 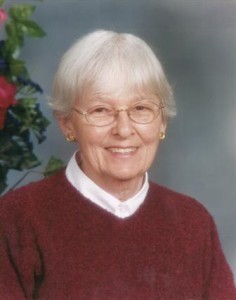 Lucile was born in Hampton, IA, daughter of Pastor Luther and Martha Loesch. Her early childhood was spent in Lake City, IA, and then in Algona, IA, when her parents moved there in 1943. Lucile graduated from Algona High School in 1949. She worked as a doctor’s assistant until entering nurse’s training at Walther Memorial Hospital in Chicago, graduating as a Registered Nurse in 1954. Later that year she married LTJG Durwood Lashbrook and moved with him to Port Townsend, WA. Lucile was a stay-at-home wife and mother for the next several years while rearing daughters Jenny, Nancy and Rosemary, and moving from duty station to duty station until Durwood’s retirement in 1973. Lucile was the epitome of the Navy wife, never complaining about the many moves. In fact, she looked forward to the new duty stations, enjoying the new environment and the making of new friends, which came easily to her. The family then moved to Portland, OR where she re-entered her nursing profession at Physicians and Surgeons Hospital. Lucile worked in the Intensive Care Unit until her retirement in 1986. Lucile took great pride in her nursing profession and took even greater satisfaction from loving and raising her three daughters. Lucile was a devout Lutheran, serving on the Altar Guild and many other committees throughout her adult life. She is survived by her husband, daughters, and nine grandchildren, Lindsey, Laura, Kelly, Marshall, Steven, Tim, Ethan, Colleen and Ben. Internment at Willamette National Cemetery.

One Response to “Lucile Irene Lashbrook”