You are here: Home » On Line Obituary » Donald Jerome Dieringer – A Grateful Family 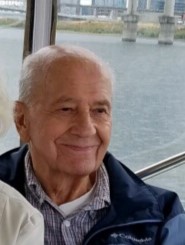 Don was the 4th of 11 children of Henry and Helen Dieringer. He attended Central Catholic and then Franklin High School in Portland, Oregon. Early in his life he worked at the Kaiser shipyards, building many Victory ships leading into and during World War II. He eventually served our country in the Merchant Marines on an ammo ship as part of a Navy flotilla. He went to many destinations in the Southern and Western Pacific and supported the bombardment of Okinawa.

After the war, Don married his neighbor, sweetheart and eventual wife of 72 years, Mary Angela Wager. Throughout his life, to include the weeks preceding his passing, Don would sing his favorite love song, “I only have eyes for you” to his beloved wife.

Subsequently, Don started a long career in the nursery industry working for another neighbor and mentor, “Van” VanVeen, at VanVeen Nursery. He eventually became the general manager until venturing out on his own in 1971 with his two oldest sons to form Dieringer Nursery Company, where he produced world class rhododendrons for almost 25 years until retiring in 1995. Don was well known and loved throughout the industry for what was eventually a nearly 50-year career. He possessed a broad mechanical knowledge and ability that made an outside service person a rare occurrence at his home. Yet he had a creative side as well and always professionally landscaped his homes to be a peaceful oasis.

Throughout his life Don was an avid outdoorsman. Fishing was at the top of his list, whether for salmon in Alaska or the coastal rivers of Oregon or trout at his beloved East Lake where his trips numbered high in the dozens. Skiing was also another favorite activity of his and he taught all his children how to do so. Many memorable night skiing trips were taken with both family and friends.

Don possessed a wonderful ability to speak with nearly anyone regardless of their station in life. He was equally comfortable and capable speaking with the CEO or the lowest person on the work ladder, the life of the party or the wallflower, the saint or the sinner. His children’s’ friends from early age on through adulthood loved his company and felt comfortable in his presence. Many loved what a cute couple he and Mary Angela made.

Throughout his life Don was an active participant in his Catholic faith and up until his passing could be seen or heard praying his rosary and praying from an old family prayer book.

There will be an internment service at Mount Calvary Cemetery, Portland on Friday, February 3rd at 12:30pm.