You are here: Home » On Line Obituary » Edward Lee Murray 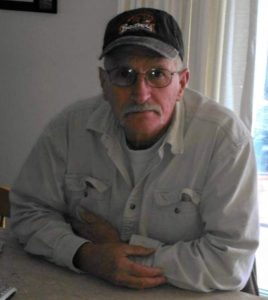 Edward Lee Murray – 3/4/1951 to 3/16/2021
Ed was born to Ola (Elouise) & Richard Lee (Dick) Murray in Muncie, IN.
He graduated from United Township High School East Moline, IL in 1970.
Joined the Navy and saw the world from 1970 to 1975.
He married Arlene Richardson in June of 1977.
He enjoyed working on the railroad: Rock Island Lines, Silvis, Iowa Railroad, Rock Island, Iowa Interstate Railroad, Rock Island, Iowa City and Newton, Northwestern Pacific Railroad, Petaluma and last was the Union Pacific in Roseville, Klamath Falls and Portland where he retired in 2011.
He then became a “Handy Man” Where he loved meeting new people all the time.
He LOVED Racing: Nascar, dirt track, trucks, cars and even boats.
He was on a pit crew from 1963 or so to 2001.
He raced outboard Motor boats from 1978 to 1995.
He always had a garden, big or small with more produce in it than we could use so neighbors & friends always got some. He loved camping and fishing on the coast and it didn’t matter if it was rainy or cold, he loved it.
He also helped his wife foster rescue dogs, 102 in 10 years.
His survivors are his Wife – Arlene in Aloha, OR
Sister – Peggy Brose – Silvis, IL
Sister – Barb & Phil Guise – East Moline, IL
Brother – Tim & Bev Murray – Holland, MI
Brother – James (Charlie) & Belinda Murray
Brother and Sister in laws – Larry & Elmina Richardson. Milton, FL
12 nieces and nephews, 30 great nieces & nephews and a few great greats.
Preceded in death by parents Dick & Elouise Murray, Grandparents: Ed & Nora Murray, and Frank & Faye Russell. In-laws – Harvey and Louise Richardson and Brother in law – Jim Richardson
Donations can be made in his name to: Oregon Friends Of Shelter Animals, Hillsboro OR, Who he help with more than just fostering dogs.
He will be honored during the summer at his favorite camping area – Nehalem Bay State Park in Manzanita, Oregon on the coast where he will be scattered out into the ocean.
Cremation service will be handled by Springer & Son in Aloha, Oregon