You are here: Home » On Line Obituary » Emory J Harry 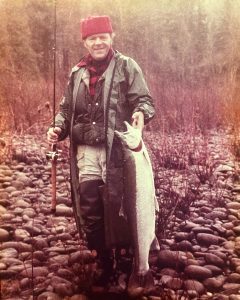 Emory J Harry, age 84, recently passed away at a Portland, Oregon hospital of heart failure, while in the comfort of his family. He was a long-time resident of Oregon, a state he dearly loved and spent considerable time exploring, boating, fishing, and appreciating its beauty.
Emory was born in Los Angeles, California and graduated in 1956 from Gresham Union High School in Gresham Oregon. After high school graduation, Emory served in a special forces unit with the U.S. Air Force. After his military service, he took philosophy, history, and engineering classes at Portland State University. He was married to Shirley Eberly for 21 years and together they raised four children: Matthew, Lynn, Mike, and Lora. In 1983, he married Vicky Hopkins, and became stepdad to her three children: Tonia, Aaron, Rodney Hopkins.
Emory worked for 25+ years in the Engineering and Marketing Department at Tektronix Inc. in Beaverton, Oregon. During his years with Tektronix, he developed several innovative electronic devices, and was granted four U.S. patents between 1988-1999. He had an inventive and creative mind, plus an entrepreneurial spirit that motivated him throughout his adult life.
Emory was an avid fisherman who loved to fish for steelhead and chinook salmon on the Sandy River, and along many rivers of the Pacific NW Coast. His passion for fishing led him to design and build drift boats, as well as custom fishing rods, which he sold to his fishing friends and acquaintances. He also enjoyed floating the Deschutes River with friends and family during the summertime. In addition to his love for fishing, he was a golf fanatic who played and won several tournaments at local golf courses: he even thought of becoming a pro, for a time. However, as he often said, “those were only dreams of grandeur.” He enjoyed listening to classical music and was a voracious reader with an academic curiosity. His reading and intellectual interests included history, politics, viticulture, and current events. He keenly studied philosophy, a subject that he took every chance to intensely discuss with others. He also appreciated and enjoyed fine wines, which led him to accumulate a sizable wine collection in his “home-built” wine cellar.
Emory is survived by Vicky, his wife of 42 years; his children Lynn Smiley, Mike Harry, and Lora Kenney (Steve); his stepchildren Tonia, Aaron (Chantel), Rodney; eight grandchildren; five step-grandchildren; one great-grandchild; and his brothers Danny (Faye) and Johnny (Mary Ellen) Harry. He was preceded in death by his parents and his oldest son Matthew.
According to his wishes, there will be no funeral or burial service. His ashes will be spread at one of his secret, and favorite, fishing spots. In lieu of flowers, the family asks that donations be made to: Wild Salmon Center at wildsalmoncenter.org. Animal Welfare Institute at awionline.org, and The American Heart Association at heart.org.
Condolences can be shared at Springer and Son springerandson.com.