You are here: Home » On Line Obituary » Hessen, Louise Mary 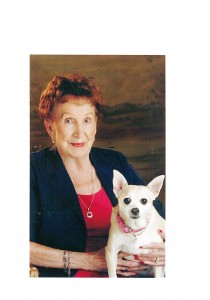 Louise Hessen, 94, passed away peacefully in her sleep early Friday morning, Sept. 13, at St. Vincent Hospital in Portland, with her daughter by her side. She had lived in Hillsboro for 62 years. She was truly loved and respected by many.

Louise was born on May 21, 1919, in Fargo, North Dakota. She was the first daughter of George and Eva Paranto. She moved to Portland after graduating and became a telephone operator. During WWII she went to work in the shipyards as a welder, and that is where she met her future husband, Larry Hessen, who was her boss. They were married in 1947 and moved to Astoria, OR. Their twins were born there on Louise’s birthday. A year later, they decided to move to California, but on their way they stopped for a picnic in Hillsboro’s Shute Park. They fell in love with the area and that’s where they lived the rest of their lives.

Louise was a homemaker at heart, and was very active in the community. She worked as a rose grader at Oregon Roses for 25 years. While her children were in school, she was a room-mother, PTA president, dance mom, seamstress, carpenter, cake decorator, knitter and crocheter. She also worked at candling eggs and being a landlord. Louise found time to be an active member of the Hillsboro Elks Lodge and was President of the Ladies of the Elks from 1969-70. She loved being a hostess to family and friends, but above all, she loved being a wonderful mother to her twins. In her later years, her interests included swimming miles in the local pool, working on her laptop, doing word searches, watching her special TV shows, and being able to visit with friends and family. Louise spent the last six years of her life living with her daughter, Patricia, her son-in-law Roland, and her beloved dog B.G. (Baby Girl). She enjoyed traveling with them and lived her life to the fullest.

Louise was preceded in death by her husband; her parents; two brothers, and grandsons, Dan Hessen and Rocky Hessen.

She is survived by her daughter Patricia Pies, son-in-law Roland Pies, her son Douglas Hessen and his wife Karen, her grandson Robert Hessen and his wife Erin, and her great granddaughters, Emma and Eva Hessen. She is also survived by her sisters, Violet Schroeder and Barbara McEvoy, along with several nieces and nephews and great nieces and great nephews.

A private interment will be at Fir Lawn Cemetery. The family suggests that remembrances and contributions be made to Dove Lewis Animal Hospital.