You are here: Home » On Line Obituary » Humberston, Russell 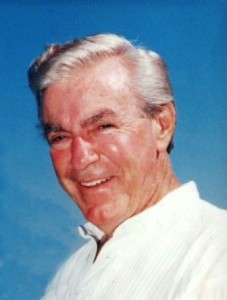 Russ was born in Braddock, a poor suburb of Pittsburgh, about a year before the stock market crash that began the Great Depression. After serving in the Air Force during the Korean War, he returned to Pittsburgh. An avid baseball fan, he had a hot dog stand and then a sandwich shop next to Forbes Field. He would close his shop during game times so he could go watch the Pirates play, and he became friends with many of the Pirates players. His venture into the food business continued, eventually owning “Russ’s Night Club,” where he crooned next to the piano and one night swooned the love of his life, Ann Vetter.

He always loved to sing: he had a deep, smooth voice, although somehow the piano player was never quite in the right key…. He especially loved Sinatra and big band music.

At some point, he and Ann decided that opportunity in Pittsburgh was limited, so they headed west to Phoenix, where legend has it he had two job offers: first as a car salesman and then second, as a milk man. His wife told him to take the steady work as a milk man, but Russ, in a rare act of defiance toward “The Boss”, chose to try selling cars.

He was the top salesperson at the dealership in Phoenix and was promoted to Sales Manager, and then transferred to a large Pontiac dealership in Los Angeles to take the position as General Manager. A few years later, an opportunity arose with a small company called Toyota. So he moved his family of then four children north to Portland where he earned the right to own the dealership after a few years. He built Beaverton Toyota into the #1 Toyota dealer in the Northwest and later expanded by adding Chevrolet and Saturn franchises, as well as some other business ventures.

Russ was an accomplished golfer, but a true master of timing: when it came time to hit his first hole in one, he did it when there was $100,000 on the line.

He was a very fortunate man, and he was well aware of it. He donated many times the amount he won with that one swing of the club, to countless organizations and individuals. His favorite was the Providence Child Center, where his wife Ann has volunteered for many years.