You are here: Home » On Line Obituary » In loving memory of Bryan Lee James 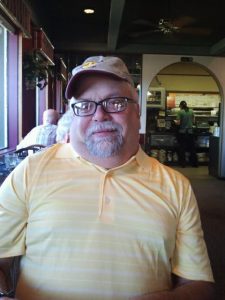 Bryan Lee James was born on July 12, 1956, in Billings, Montana to Harold and Lois James. Bryan was the youngest brother to Delores, Harold, and Mark. Bryan’s early life in Montana, was spent enjoying camping, fishing, bowling, and spending time with his older siblings.
After graduating from Billings Sr. High School, Bryan enlisted in The United States Navy Bryan was stationed on the USS MT. Hood from 1974 – 1976. He later served as a Reservist and Oregon National Guard member.

Bryan met his wife, Karen, while studying at MSU Billings. They were later married on June 28th, 1986. Bryan graduated in 1988 with a B.S in Business Administration.
Bryan and Karen welcomed their oldest son, Adam, into the world in 1988 in Billings, Montana. The next year the family moved to Oregon making it their permanent home. In 1992 their 2nd son Tyson was born and in 1994 they welcomed their only daughter Heather.

Bryan worked several jobs in the service industry to support his family. His dream job was working in the semi-conductor industry and later held several jobs at Xerox and Intel.
Bryan enjoyed spending time with his wife. They would take trips together to visit family in Montana and visit Seaside, Oregon. Bryan loved his daily morning coffee, spoiling his dog Smokey, and keeping up with the latest Marvel movies. Bryan was a fan of the Portland Trail Blazers and enjoyed watching the games with Karen.

3 Responses to “In loving memory of Bryan Lee James”