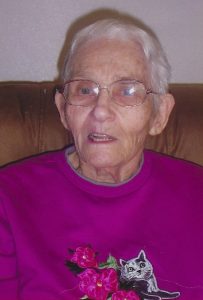 Ivy was born Ivie Jane Hill on July 21, 1922 in Greenfield, Tennessee to William Lafayette and Ovie Irene (Sharp) Hill. Ivy married Greenfield resident Fred Morris in 1947 and they had a son, William, born in 1948.

Ivy, Fred and William moved to Southern California in the early 50s. After moving to California, daughter, Sally Irene, was born in 1953, followed by son, James Neal, in 1961.

Fred passed away in 1982. Ivy relocated to Oregon with son, James, daughter-in-law, Rose, and granddaughter, Valerie, in 1989 and lived with them until health issues required her to move into assisted living.

She was preceded in death by her father, mother, and husband; sister, Katie Essary; and son-in-law Gerald (Lonnie) Enos.

Ivy was a strong Tennessee farm girl, but was also incredibly sweet, kind and caring towards family and dear friends whom she loved. She spent her adult life as a homemaker for the family. Her children’s and grandchildren’s well-being and happiness was always at the forefront of her thoughts. Even at 100 years old, she was calling her children often to check up on everyone and to make sure that everyone was doing okay. Ivy’s motherly concerns about her children never faded, no matter the age of her three senior aged children.

Ivy enjoyed simple pleasures in her life: watching the different variety of birds at the feeders and the squirrels playing in the yard, reading her gossip magazines, and watching her favorite soap operas and cooking shows on TV. Ivy enjoyed frequent visits with her local family members, especially when her great-granddaughters Adalina and Ivy Jade were brought over to visit with Gramma Ivy.

The family would like to extend their heartfelt gratitude to Zenaida Alviar and the ladies and gentlemen of Family Care in Aloha, Oregon, who took care of Ivy with love and compassion over the past 12 years of her life.

As Ivy requested, her remains were cremated and she will be buried in her home state next to her husband Fred at Morris Cemetery in Greenfield, Tennessee. Funeral date and arrangements will be determined at a future date.