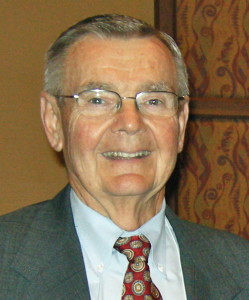 James Paul Fratzke passed away on Nov. 18 after a long battle with Non-Hodgkins lymphoma and a recent diagnosis of pancreatic cancer.

He graduated from the University of Oregon with a Bachelor of Arts degree in General Science in 1960 and was a member of the Sigma Phi Epsilon fraternity.

Jim graduated from the OHSU School of Dentistry, in 1963. Upon graduation, he joined the U.S. Navy and served at Camp Pendleton and on the U.S.S. Oriskany at the start of the Vietnam War.

In 1961, he married Barbara Ann Johnson of Portland. They moved to Salem in 1965 after he was honorably discharged from the Navy and opened his dental practice. He practiced dentistry in Salem for 37 years until he retired in 2002 and was a member of the N.E. Salem Lion’s Club for many years, contributing his time to several philanthropic and service projects in the community.

Jim served in several local, state, and national dental organizations throughout his career,

A memorial service will be held at The Reserve Vineyards and Golf Club in Aloha on Sun., Dec. 8, from Noon-3 p.m.

Donations may be made in Jim’s name to The Dental Foundation to support the Tooth Taxi, P.O. Box 2448, Wilsonville, Oregon, 97070, or via their website at www.smileonoregon.org.