You are here: Home » On Line Obituary » Joan Phyllis Skaggs 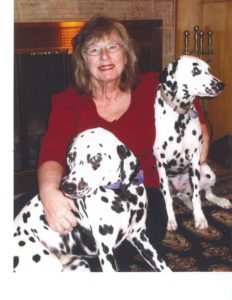 Joan Phyllis Skaggs passed away December 15, 2020 after a long life of adventures. Born in Black Point, Nova Scotia, to Emmerson and Leah Wilnoff, she was the youngest of nine siblings. In 1959, Joan graduated from the nursing program at Victoria General Hospital in nearby Halifax, then moved to California with a couple of friends. Working at Long Beach Memorial Hospital, she met merchant marine Walter DeWayne Skaggs, called John. They married in Las Vegas in 1962 and bought their Portland West Slope home in 1963. They had 24 years together with their dogs, enjoying their friends and neighbors, his and hers matching Trans Am cars, and hunting and fishing expeditions to Eastern Oregon and elsewhere. John died in 1986. Joan worked as a psychiatric nurse until her retirement.

After John’s death, Joan followed her passions, volunteering at the Portland Art Museum, ushering at plays and concerts, and attending an array of musical events from her season tickets at the Oregon Symphony to jazz festivals, ragtime, and, every year, David Friesen’s Christmas concert at Woodstock Wine & Deli. For many years she coordinated the usher program at Artists Repertory Theatre. She took classes in watercolor painting, calligraphy, and much more, including piano and bridge at the Elsie Stuhr Senior Center in Beaverton. Wherever she was, she made friends.

As a young woman, she skied and ice-skated. In recent years, a day was not quite right if she didn’t start with a swim and friends at a local pool.

Joan also volunteered in her community. One program where she helped was a U.S. Post Office- Providence St. Vincent Medical Center partnership to sign up neighbors for CarrierLink, so mail carriers could be alerted to help in emergencies.

There were always dogs in Joan’s life and for many years they have been Dalmatians. Her last two, Jamie and Freckles, were her lively companions for over a decade.

Another passion was traveling. Joan visited many places in Europe on tours led by guides that became fast friends. She went to Africa with All Classical Radio and with other groups to Cuba and Scandinavia.

Joan loved her neighborhood and it was mutual. She could often be found in her front yard tending to her roses and potted plants, or just sitting in a folding chair, full of cheerful greetings and laughter for the many walkers and their dogs passing by. She knew all the kids for several blocks around. One night after her passing a children’s Christmas parade became an homage to Joan with loving signs and singing,

Joan is survived by her sister Lois of Black Point, sister-in-law Myrtle of Queensland, her nephew David Henry and his family of Halifax, and other nieces and nephews in Nova Scotia. She was predeceased by her beloved husband John, her sisters Pauline, Mary, Florence and Jean, and brothers John, Ross and Nelson.