You are here: Home » On Line Obituary » John Baricevic 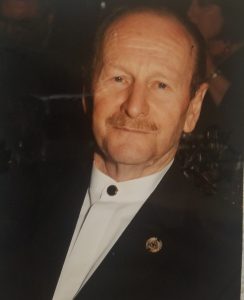 John Joseph Baricevic
.05.04.33 – .04.28.22
John was born in Portland, Ore. on May 4th, 1933. He passed away on April 28th, 2022 at Maryville Nursing Home in Beaverton, Ore. His wife Kay and daughter Keri Lyn were at his side. John’s parents, Joseph Baricevic and Katherine Gascic were immigrants from Yugoslavia. He was raised in NW Portland. He attended school in his earliar years at St. Patrick’s Catholic Church. And he attended high school at Benson High in Portland, Ore. In his teens he worked at the Vaughn Street Ball Park. He was a great fan of the Portland Beavers Baseball Team. He was drafted into the Army at 18 years old and is a Veteran of the Korean War. Soon after he worked in construction. On February 9th, 1962 he married Kay Howarth and was married for 60 years. He continued to work in construction and he was a 65 year member of Operating Engineers Local 701. After his retirement they enjoyed Cruising the seas to many different places for over 20 years.
Survived by his wife, Kay; daughters Keri Lyn and Barbara; 4 grandchildren and 4 great grandchildren. He was preceded in death by his Tim.
At Johns request there will be no service. A family gathering will be at a later date.