You are here: Home » On Line Obituary » Karen Arlene Corkrum 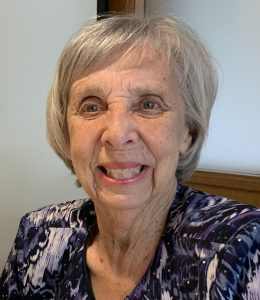 Karen Arlene Corkrum, age 85, died on November 10, 2021 at The Ackerly at Timberland, a retirement community, in Portland Oregon.

Karen was born in Newport, Oregon to Al and Thyra Ross on August 29, 1936. Near her coastal birthplace, Karen’s fondest childhood memories were of Beverly Beach, owned by her grandparents, where they operated guest cabins and a fish hatchery. She spoke often throughout her life of happy family beach times and proudly displayed in her home a collection of Japanese glass floats that her grandmother collected after storms.

The family lived in Portland, Oregon until Karen was 12, when they moved to Walla Walla in 1948, as her father, a Corps of Engineer employee, was involved in planning and designing dams on the Columbia and Snake Rivers. Karen began high school at WaHi where she was involved in 4-H, winning prizes for her sewing ability. This skill blossomed throughout her life, making clothes for herself and her daughter’s school years as well as producing many household seamstress projects.

After graduation from WaHi in 1954 at age 17, Karen attended Washington State College in Pullman to study home economics. The summer before leaving for college Karen was introduced, by a mutual friend, to Jim Corkrum, the son of a Walla Walla wheat farmer. Their relationship flourished and by August 1956 they were married. Shortly after, as Jim was starting his Army obligation, Karen became a telephone operator in Walla Walla, saving money for their first car. The Army and the new car took them to Vacaville, California where they joyfully welcomed a daughter, Janette. Karen thrived being a mother and quickly put her home economics skills to use, subsequently managing 10 household moves in as many years. They finally settled in the eastern Washington desert towns of the Tri-Cities, where Jim began his career at Columbia Basin College.

In the 55 years living in Kennewick and Richland, Karen was happily involved in the community and a wide circle of friends. She was a charter member of Vista Women’s Club organizing improvements to the local neighborhood and providing neighbor support. For many years, she worked as a Washington State Civil Service Exam monitor. She was also a charter member of the Tri-Cities Court Club where Karen maintained a routine of water aerobics and swimming 5 days a week for over 30 years. In 2000, Karen and Jim built a new home where she expressed her interest and skill in décor, design and color.

Karen and Jim travelled extensively for 40 years via motor home, cruise ship, planes, cars and trains across the US, Europe, New Zealand and the South Pacific. As proud and involved grandparents, their favorite annual trips were in the motor home with their young grandchildren. The Red Rocks of the Southwest, remote back roads and soaking in various Northwest hot springs were also particular favorites. In 2020, they moved back to Karen’s Portland roots to be near their daughter, son-in-law and family.

Karen was the consummate hostess making all who entered her sphere feel welcome and appreciated. Her strong value of the importance of family and the joy of social interactions were apparent to all and continued to the very end of her life.

In Karen’s honor, the family suggests a donation to Portland Providence Hospice.

One Response to “Karen Arlene Corkrum”