You are here: Home » On Line Obituary » Mitchell, Peter Gary 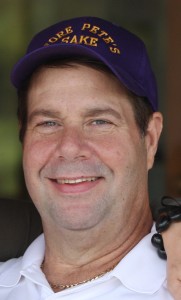 Father, Husband, and Friend to many, Pete Mitchell passed away on Monday, December 2, 2013 following a hard fought battle with Esophagus Cancer.

The youngest of five children born to Deane and Mary Janis Lamping-Mitchell, Pete was born on May 25, 1960 in Seattle, WA and raised on Bainbridge Island, WA. He attended the University of Washington, graduating with a Speech Communications Degree in 1983. He moved to Beaverton, OR from Seattle WA in May, 1986 and met his wife Julie in June of 1986. They were wed July 21, 1990. Pete worked in Sales within the Electronics Distribution field for 26 years.

Pete was very active in coaching of youth sports his son Riley participated in and cheering his daughter on as a competitive gymnast and volleyball player. He loved to golf, snow and water ski, fish, hunt, and watch his beloved Husky Football Team.

In lieu of flowers, the family asks that you make donations to the Peter Mitchell Cancer Fund at Bank of America.

One Response to “Mitchell, Peter Gary”