You are here: Home » On Line Obituary » Patsy Ann Noblitt 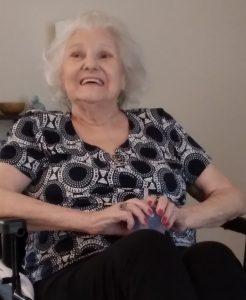 Patsy Ann Noblitt was born March 5, 1935 in Morristown, Tennessee, the daughter of the late John and Tea Pearce.

She was united in marriage to Carol Richard Noblitt on April 18, 1962 in Oklahoma City, Oklahoma. Following their marriage, they resided in Oklahoma, California, and Arkansas for many years, until 2015, when they moved to Oregon. Settling in the Beaverton community to reside with her son and family.

Patsy was a stay at home mother of five children. She also helped with her grandchildren when they were born.

Among her special interests, she enjoyed spending time with her family, crossword puzzles, going shopping, getting her hair and nails done, dancing, and drawing. She always loved a good restaurant.
She was preceded in death by her parents, John and Tea Pearce, her sister Millie Leggett, and by her beloved husband Ricky.

Her family includes: her five children and their spouses, Tea Rose and Ike Jeffrey, of Centerton, AR; John and Denise Noblitt, of Beaverton, Oregon; Millie Leonard, of San Antonio, Texas; Clara Noblitt, of Prairieville, Louisiana, and Dain and Jennifer Noblitt, of Independence, Oregon.