You are here: Home » On Line Obituary » Richard “Dick” Dinger 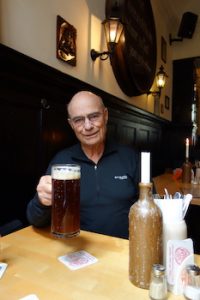 Richard William Dinger was born on the family farm in Marshall County, South Dakota on Nov 29, 1933 to William and Violet (Shilhanek) Dinger. He was the oldest of 10 siblings. He died peacefully in his sleep on Nov 11, 2022 in Portland, Oregon.

He attended schools in Hecla South Dakota where he graduated from Hecla High School in 1952. He was a great athlete and participated in many sports. He loved playing on the 6 man football team. He was also a member of an American Legion baseball team that won the state title in 1950, where his future brother in law (Ronald Corliss) pitched a no-hitter. Dick was also a state champion in the 100 yard dash in 1950.

He married Shirley Corliss in 1954 and they started married life with Dick working on the farm and Shirley teaching in a one room schoolhouse. In 1956 Dick was drafted and they both went to live in Bad Kissingen Germany with the 534th Field Artillery Battalion. They made lasting memories traveling around Germany with their good friends Mike and Jan Calhoun.

Their first child, William, was born in Germany March 29th 1958. They returned to the states soon after his birth and continued farming in Hecla. Their second child, Sheryll was born Nov 13 1960 in Britton.

In 1967 they moved to Oregon. Dick was a pipe fitter in the shipyards, a Maintenance Specialist at Physicians and Surgeons hospital, and then spent the final 20 years of his career at Pennwalt/AtoChem as the Maintenance Foreman. He retired at age 65.

He was a member of St. Matthew Lutheran Church from 1967-2012. He and Shirley left St Matthew to attend a mission church closer to their home and have been members of Community Christ Church ever since. He spent many hours as a volunteer on church councils, as an usher, and more recently as a greeter.

Dick was a proud owner of farmland and Hereford cows (like his parents raised) in Hecla South Dakota where he grew up.

He loved vegetable gardening, sporting events, a good beer, making copper garden trellises, growing Dahlias, being a handyman for neighbors and friends, visiting with people, and most of all, his family.

He is survived by his wife of 68 years, Shirley; his two children Bill and Sheryll (Ken), and 3 grandchildren, William (Cindy), Alexander (Peaches) and Katrina (Zach)

A family celebration will be held in Hecla, South Dakota at a later date

In honor of Dick please consider the following:

Volunteer at a Church or Community event
Have a beer with a friend
Watch and cheer for Oregon State Beavers, Gonzaga Basketball, Duke Basketball, North Dakota State Bison football or the Seattle Mariners
Take a drive in the countryside and admire (or critique) the crops
Participate in a Walk to End Alzheimers
Donate to Community Christ Church:
3300 NW 185th Ave #224
Portland Oregon 97229