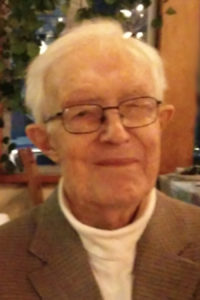 Roswell Strong Coles, Jr. passed away peacefully on March 11, 2021 in Portland, Oregon. Roswell “Rod” was born on October 7, 1933 in Staten Island, New York. He was the only son of Roswell S. and Pearl L. Coles. He grew up in Staten Island and graduated from Staten Island Academy in 1951, where he played on the varsity soccer team. As he grew, he liked sports, nature and science. He graduated from Wagner College in 1955 with a BS in Biology, from Long Island University in 1957 with an MS in Biology and from the University of Minnesota in 1964 with a PhD in Microbiology.

He met Mary Anna Gibson at Wagner College, and they were married on August 6, 1955. They had 5 children, Mary Elizabeth, Roswell III, Christopher, Kathryn, and Andrew. In 1967, after living in Connecticut, Minneapolis, and Staten Island, they moved to South Orange, New Jersey where they lived for almost 50 years. He was a devoted father and spouse. He worked as a Professor of Microbiology at the College of Medicine and Dentistry of New Jersey, performing research and teaching microbiology. His research resulted in multiple publications. He retired in 1998.

In South Orange, he was a devoted member of the Episcopal church of St. Andrew and Holy Communion which is also in South Orange. He served as a member of the Vestry, and on several other committees. He served a number of years on the South Orange Board of Health. He enjoyed reading, music, and nature. He remained an avid sports fan and was thrilled to see the NY Rangers finally win the Stanley Cup in 1994.

In 2016, he and Mary gave up their big house in South Orange and moved to a smaller house in Beaverton, Oregon where they were close to Roswell III and Andrew. Kathryn and Christopher also moved to Oregon and their family was complete there.

He was very fond of his sister, Janet, and his three grandsons. He is predeceased by his parents, his spouse, Mary Anna and daughter, Mary Elizabeth.

In lieu of flowers, the family requests donations to: The Audubon Society, the Nature Conservancy, or the Humane Society.