You are here: Home » On Line Obituary » Shirley Rose Hurrell 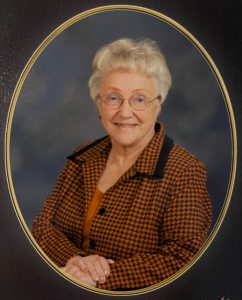 Shirley Rose(Morgan)Hurrell aka “Grandma Cookie” passed away peacefully at her care facility after dealing with Kidney Failure and Vascular Dementia. Hospice rules allowed her family to be with her during her final days.
Shirley was born in Longview, WA to Lyndon and Rose(Laurine)Morgan.

While attending Behnke-Walker Business School she met her future husband, John(Jack)Hurrell. They married in Portland, OR, November 20, 1954. Their oldest daughter Lynne was born in 1956 and Debra was welcomed in 1957.

Shirley joined International Harvester as an executive secretary in the early 60’s for 23 years and Navistar Credit Corporation for 10 years.

She became her daughter Lynnes champion after she was diagnosed as developmentally disabled at age 4. She was very involved in Lynnes education and along with Jack volunteered at ARC/Association for Retarted Citizens/later known as Edwards Center in Aloha, OR.

Lynne remained at home until she moved as a teenager to Fairview Training Center in Salem, OR. Shirley knew there had to be a better environment for Lynne to live in and began her efforts to establish group homes for the developmentally disabled in her local community.

This included, but was not limited to lobbying local constituents, Senators, Governors and flying to Washington D.C. to plea her cause. Her efforts were recognized and in the early 70’s the first group home in Oregon was opened and Lynne was one of the first to move in.

A dedicated Catholic, she and her husband were founding members of Holy Trinity Church in Beaverton, OR.
She enjoyed traveling the world with her husband Jack, and in later years with her daughter Debbie.
Among her many passions & talents were knitting, sewing, quilting, baking, canning, gardening and genealogy. She was a member of AHSGR (American Historical Society of Germans from Russia)and traveled twice to Russia gathering family history.

She was a beloved Mother, Grandmother and Great-Grandmother. In-fact, her nickname in her neighborhood was “grandma cookie” because all the children on her street would come over for a fresh cookie on their way home from school, sharing what they had learned that day.

Her love of family, caring nature and acceptance of everyone will be her legacy.
Shirley is survived by her daughter Debra Wenker along with grandchildren Nolan(Alexis)Wenker, Alison(Chris)Orton, great-grandchildren Reese, Colton, Aubrey and Ashland.

In lieu of flowers, remembrances may be made to Edwards Center Inc, edwardscenter.org/donate.