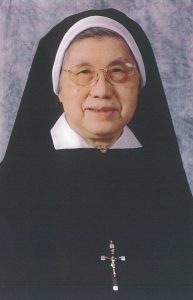 Sister Cecilia Lee, the eldest living member of her congregation, passed away peacefully at the Convent of the Franciscan Missionary Sisters of Our Lady of Sorrows in Beaverton, the evening of March 20, 2021. The rosary and Mass of Christian Burial was held at Our Lady of Peace Retreat and the burial at Mt. Calvary. Unfortunately, due to COVID it had to be a private event.
Sister Cecilia was born on August 19, 1920, in the city of Ling Ling in the province of Hunan, China. Her parents, Philip and Maria Lee, had ten children. Of the surviving children, Sr. Cecilia was the second eldest. Two died in infancy and three during early childhood. Later her brother Philip drowned at the age of 26 in a river, when trapped in quicksand. Joseph and Thomasus, her remaining siblings, predeceased Sister some years ago.
Sister Cecilia received her elementary education at Sacred Heart School in Hunan, Heng Yang. She had six years of formal education. When not at school, she helped her father by wrapping the soap which he made and sold within two provinces. She also helped her father’s friend make toothbrushes out of pigs’ hair, by threading the hairs through a bone handle.
On August 24, 1939, at age 19, Sr. Cecilia entered religious life, the newly formed Congregation of the Franciscan Sisters of Our Sorrowful Mother (later changed to the Franciscan Missionary Sisters of Our Lady of Sorrows). Some of her school friends later entered religious life with her: Sr. Clara, Sr. Theresa and Sr. Agnes. Egyptian Franciscan Sisters instructed the novices in their formation, and Bishop Palazzi, the founder of their new congregation, often visited to give further instruction.
Sister Cecilia professed first vows on March 19, 1943 in Heng Yang. However, from 1944 until 1946, she and the other sisters dispersed as they fled the Japanese invasion. Sr. Cecilia and Sr. Angela Lee fled to Ling Ling to her Father’s house. Three days later, Sr. Cecilia and her family and Sr. Angela fled to the mountains (Dao Hsien) many miles away. They walked for 21 days through the mountains and around three towns to get there, eating food (mostly sugar cane) from abandoned fields. When they arrived, they stayed with her father’s friends.
About one-and-a-half years later, in 1946, the pastor in Heng Yang sent a letter telling them that all the Sisters had returned but them. (She was always amazed that the letter reached her, since the country’s mail system wasn’t functional.) They walked for 21 days back to Ling Ling and then took a car to Heng Yang. Although the convent was all but ruined, the sisters professed final vows. Sr. Cecilia professed vows on April 17, 1947.
In 1949 communism began to take hold in mainland China, and once again the sisters fled, this time to Hong Kong for three months and then to Macau. (Some sisters went ahead to the United States.) In Macau, they had the job of cooking for the seminarians. Then in 1951 Sr. Cecilia with the others went to Santa Cruz, California. There at St. Clare’s Retreat house, Sister helped with the retreat ministry, cooking and cleaning retreatant rooms. She also was sacristan. During this time, she taught herself English.
In 1958, Sr. Cecilia moved to Our Lady of Peace Retreat Convent where she worked next door at St. Mary’s Home for Boys. Leaving in 1972 for Taiwan, Sister spent time doing catechetical work, returning to Beaverton in 1986. After that she spent time in the congregation’s convents in Canada and Gallup, New Mexico.
In more recent years, Sister traveled about on her motorized scooter doing odd jobs around the house. She also enjoyed reading the Chinese newspapers, working on her stamp collection and taking plants to and from her indoor houseplant hospital, where she would revive drooping ones and then return them to grateful owners. Sr. Cecilia admitted she “liked to do everything.” She was a jack of all trades. She was a selfless pioneer in faith, the last of the congregation’s original founding members.
Donations in memory of Sister Cecilia are destined for the congregation’s missions in China and Hong Kong, and may be sent to Our Lady of Peace Retreat, 3600 SW 170th Ave., Beaverton, OR 97007 or online at www.olpretreat.org.