You are here: Home » On Line Obituary » Timothy John Lehman 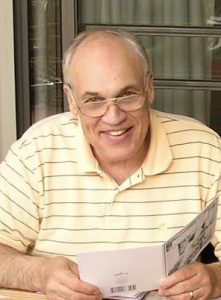 Tim Lehman, a loving husband, father, grandfather, brother and friend, passed away on Jan. 8 with his beloved wife by his side. He was 77 years old.

Tim was born on Sept. 24, 1945 to Edward and Harriett Lehman in Beaverton, Oregon. The youngest of three boys, Tim grew up working and playing on the family farm. Even after the land was sold and developed into the Charlais neighborhood, Tim’s inner farmer was frequently on display as he rode his John Deere mower and carefully manicured his yard.

Tim graduated from Sunset High School, class of 1963, and went on to graduate from Linfield College in 1969. During his time at Linfield, he joined the Alpha Tau Omega fraternity. This brotherhood would provide lifelong friendships. Tim met regularly with his ATO brothers until the final years of his life. During his time at Linfield, Tim also began serving in the U.S. Army Reserves. He served seven years, and was honorably discharged as a Sergeant First Class.

Tim’s connection to Sunset High School, however, would have the most profound impact on his life. While attending his 20th reunion, he would meet his true life partner, Marcine “Marti” Ellis. While there is some debate whether she caught his eye in high school, or simply later in life, their initial connection was undeniable. They were married in 1984, six months after re-connecting. They were just several months short of celebrating their 39th year of marriage when Tim passed.

In true Brady Bunch fashion, Tim and Marti created a blended family, each bringing two biological kids to this new union. Neither embraced the term or concept of being a stepparent, and instead, set out to truly love and parent all of their children as their very own.

Tim was a dedicated father, and husband. He embraced his role as a provider, and worked as an account executive in the shipping industry, working at a number of companies over the years including Garrett, Milne, and ABF.

Tim was known and loved for his childlike enthusiasm, which was most frequently expressed when bacon or any kind of sweet treat was presented. He loved camping and RVing and could park that big rig in any tight space with finesse. He designed the biggest garage in the neighborhood when he built his home, and stocked it with every tool known to man so he could putter away. He was a regular at Starbucks, and loved the fellowship he found with “the guys” during his daily visits. He delighted in being a grandfather to his seven grandchildren and unabashedly adored his grandpets.

Most of all, Tim loved Jesus. His deep faith was at the heart of everything he did and colored every single one of his relationships.

The family would like to thank the staff at The Quarry for the exceptional love and care Tim received during his final years.

A memorial service will be held at Springer and Son Aloha Funeral Home on Saturday, January 21, 2023 at 2:00 PM.

If you are moved to make a donation in honor of Tim’s memory, donations can be directed to Laurelwood Baptist Church in Vancouver, Washington.