You are here: Home » On Line Obituary » VanderWeele, C. Robert 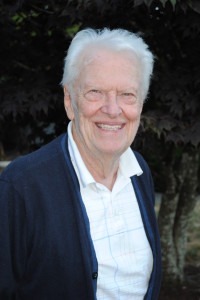 C. Robert VanderWeele passed away on January 8, 2014 after 95 years as a bright, generous and loving son, brother, husband, father and grandfather. Bob was born November 15, 1918 in Kalamazoo to John and Catherine Vander Weele. He attended Kalamazoo Central H.S. and Illinois Institute of Technology. He married Anne Sarno on June 12, 1943, and they were long-time residents of Grand Rapids and members of St. Stephen’s parish. He served in the Army Air Force during WWII and had a 43-year career at Michigan Bell Telephone Company. He worked at Bell Laboratories on the Nike missile defense system and ultimately became responsible for all network services in southern Michigan. He pioneered the use of electronic switching and started Michigan Bell’s state-wide training school. He later taught at Grand Rapids Junior College. Bob grew up with a curiosity for anything mechanical and electrical; he loved to learn and try anything new. As a young man, he enjoyed hunting, swimming, iceboat racing and flying airplanes. In his later years, he painted, kept bees and made wine; he danced into his nineties. Bob shared with his wife of 65 years a commitment to family, church, community, and country. His smile, easy laugh, and enjoyment of each day and every facet of life will be greatly missed. Bob is survived by cousin Don DeWolf; children Marie (the late Robert Lutz), Carol, Robert Michael (Kay), John (the late Sue), James (Cheri), Barbara, and Mary (Jon Ghastin); grandchildren Jonathan, Renée, John, David, Mary, Katherine, Sarah, Paul, Ruby and Harvey; and eight great-grandchildren. He was preceded in death by wife Anne, son David and brothers John and Fritz. In 2005 Bob moved with Anne to Portland, Oregon and lived with his daughter Mary and her family; until his death he lived a full, happy life. A memorial service will be held at the Maryville Nursing Home chapel on Saturday, January 18 at 11:30 am. Remembrances may be made to the Carter Center, the Salvation Army or any domestic women’s shelter.