You are here: Home » On Line Obituary » Virgil Lester DeHaan 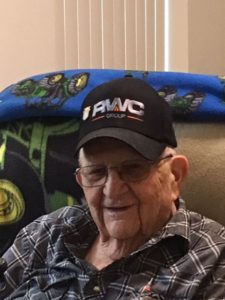 Virgil Lester DeHaan was born in Portland, Oregon on December 28, 1924 to John Rudolph DeHaan Sr. and Effie Marie (Davis) DeHaan. The oldest of six children, he spent his early years growing up in Garden Home where he attended McKay School. In early 1943, he was drafted into the United States Army, but mumps delayed boot camp until late spring. He trained at Camp Abbot—now Sunriver—to serve in the 27th Infantry’s 152nd Combat Engineers. After boot camp, he trained for jungle warfare in the Hawaiian Islands. In November 1943, he shipped out to the Gilbert Islands where he received a bronze arrowhead and a bronze star for the Battle of Makin Atoll. He also earned bronze stars for the Battles of
Saipan and Okinawa. Before arriving home in December 1945, he served in New Guinea and Korea.

Preceding and following the war, Virgil worked for Northwest Natural Gas, formerly known as Portland Gas and Coke. He worked as a pipe welder for most of his career. He retired after over forty years of service and was one of the fortunate ones to enjoy retirement for thirty-four years.

In early 1954, Virgil was introduced to Iona Marie Rothrock, who later became his wife on August 15 of that year. Within eleven years, Virgil and Iona had three children: Elaine, Duane, and Jeanine. For many years, Virgil kept an immaculate yard, which some compared to a golf course. Each spring, he planted a robust garden. The winter months kept him busy in his
workshop where he made furniture, clocks, and even dabbled in carving.

In 2018, Virgil moved to Hearthstone of Beaverton where he made friends with the many wonderful people there. Hearthstone soon became home, the place he preferred to be. The family thanks the staff and ownership for their love and care these last three years. Many thanks, also, to Traditions Healthcare for managing his care the last two weeks of his life.

Virgil is survived by his children Elaine Mallett and her sweetheart Dave Yuschat of Hillsboro; Duane DeHaan and his wife Laurie of Rigby, Idaho; and Jeanine Stewart and her husband Richard of Winnsboro, Texas. He’s also survived by his grandson Brian Mallett and his wife Micaela of Bonney Lake, Washington; grandson Kevin DeHaan of Rigby, Idaho; sister Pat
Eggers of Corvallis; brother David DeHaan and his wife Joanne of Beaverton; and numerous nieces and nephews. He is preceded in death by his wife Iona; parents John and Effie DeHaan; brothers Alvie and John DeHaan; and sister Ann Cassidy.

In lieu of flowers, please consider donating to the Disabled American Veterans at dav.org.

Many thanks to Springer and Son in Aloha for their assistance.