You are here: Home » On Line Obituary » He had a special inner light that is deeply missed by all 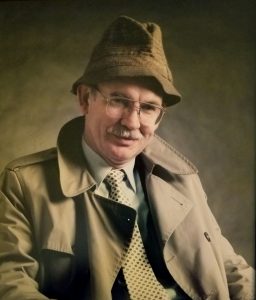 Survived by wife Virginia E Howarth
Nieces Keri Lyn, Barbara, Carrie and Kristina
Nephews Tim, Hal, Steve and Rick
Attended Beaverton School District and Portland State University
Dennis’s father passed away when he was 8 years old. He helped take care of his mother and 2 sisters. He delivered the newspaper and did housework among other small jobs within the neighborhood to contribute money for his family. Dennis was drafted into the US Army in April of 1960. He received an honorable discharge after serving at Officers Finance Headquarters in Stuttgart, Germany. While in Germany he saw the Berlin Wall being built. When he came home he became active in the Jaycee’s. He helped publish their newspaper. He then worked as a freelance photographer. Browsing through a camera store he saw his old friend Joe Fhyr, Sr. Joe offered him a job at Suburban Photo selling retail cameras. For the next 30 years he sold and serviced amateur cameras and professional cameras. He also sold industrial ID cameras, and more throughout Oregon and Washington. After a rigid examination, Dennis received the Certified Photographic Counselor (CPC) Award. This award took place throughout the Pacific Northwest. Over 100 applicants were considered. Dennis was one of three who received this honor. On September 5, 1966 he married Virginia E. and they were married for 54 years. Virginia was a career person in the medical and rehab sales and service field. In 1975 Jim Springer and Al Reser asked Dennis to photograph for the 4-H and FFA livestock auction of children with their animals. In 1976 the head of the auction liked Dennis’s work so well that Dennis received the honorable bronze award. That same year Dennis was asked to join Beaverton Rotary and would be a member for 42 years. He was also acknowledged for 36 years perfect attendance. In 1989 Dennis was awarded the Paul Harris Award by Rotary for service as a photographer at the 4-H and FFA auction and for his other services in the community. Dennis was well known, liked and respected in the community. Dennis and Virginia enjoyed wine making, camping, fishing, birding and traveling. They were members of the NW Steelheaders and the Audubon Society. Dennis’s greatest loves were for his family, work, membership in Rotary and his daily morning coffee with the crew. Dennis was a courtly, kind, gentle, considerate, and congenial man. He had a special inner light that is deeply missed by all.