You are here: Home » On Line Obituary » In Loving Memory of Thelma M. Everson 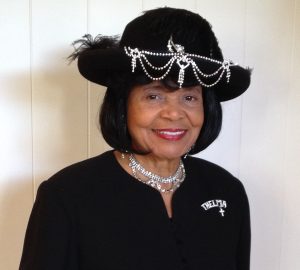 In Memory of Thelma M. Everson

On June 2nd, 2021, Thelma M. Everson, lost her yearlong battle with cancer. She was the youngest of six children born to Josephine and George Davis in Jackson, Mississippi. Thelma was orphaned at age 3 and was sent to live with an elderly aunt and uncle. At age 12 she was rescued from those abusive relatives when her oldest sister Addie married and from then on was raised by Addie like she was her own child.
Thelma blossomed as a student at Lanier High School and was voted best dressed in1954 during her Senior Year. She graduated from Lanier H.S. and attended Mercy College in Detroit. Thelma later met Grant Everson, Jr and they were in married 1957. They were married for 31 years.

Thelma worked for General Motors in Detroit, Mi. from 1967 to 1975 as an upholstery seamstress after successfully fighting to integrate the plant. GM upholstery is where Thelma mastered her skills as a seamstress. She was very skilled with a needle and thread and enjoyed making her own dresses as was the custom in that era.

Upon leaving GM in 1975, she opened a small neighborhood mini-mart. Within two years Thelma had grown the business and was able to buy out the adjacent barber shop and tripled the store size. In 1979 Grant Everson left GM to run the mini-mart.

After successfully selling for Stanley Home Products, selling handmade decoupage purses and holiday wreaths, she became restless and set her sights on opening a BBQ restaurant. After numerous attempts at obtaining a bank loan at a time when all women were required to have a man’s signature and most Blacks were denied business loans, she secured the loan one day before the loan officer moved out of state. He told her that she and her God should now be happy and leave him alone!

She hired a contractor and built her BBQ from the ground up to her exact specifications. Thelma started Mrs. E’s barbecue in 1979 and it was profitable every yr until she sold both businesses in 1990 and moved to Portland, Oregon to be closer to her grandchildren.

Thelma started the next chapter in her life in 1991 at Nordstrom’s as an Asst. Café Manager (Downtown and Washington Square) before retiring in 2005. Thelma was a two-time Nordstrom Employee Circle of Excellence winner.

If you ever ate at a Nordstrom’s café between 1992 and 2005 (Washington Sq. or Downtown) you may have enjoyed Thelma’s famous Chicken Salad with chopped chicken, cranberries, chopped onions, pickles celery and house made mayo. Her recipe was adopted by all Nordstrom’s cafes in the Pacific Northwest.

Thelma Everson left a lasting impression on everyone that knew her. She was fiercely protective of her family. She was also very loyal and dependable. Her favorite saying was “My word is my bond”.
If she made a commitment to you, she kept it no matter what.

Thelma is survived by her two children Tony and Cynthia; two grandchildren Michael and Olivia; and four great-grandchildren (Elijah, Levi, Jada, Lorenzo due in August); her sister Lillian; and ex-husband Grant.

Memorial Service and Viewing will be held on June 9th from 10:00 AM to 12:00 PM at Springer and Son Aloha Family Funeral Home, 4150 185th Ave, Beaverton, Or 97007. Remembrance comments will begin at 10:30 AM. A private entombment ceremony for immediate family will be held on June 10th at Crescent Grove Cemetery.

She was loved, She will be greatly missed, And she will never be forgotten.