You are here: Home » On Line Obituary » Ralph Cleveland 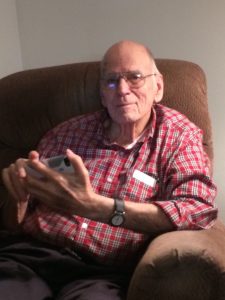 Esteemed Pacific Northwest woodworker, Ralph Cleveland, 96, died of natural causes on May 11th, 2021, in McAllen, Texas, where he was residing with his oldest son and his family.

Ralph was born in Hillsboro, Texas to Raymond Baker Cleveland and Annie Parryzade Cleveland, (nee Beene), who were both secondary school teachers. After growing up on his family’s farm in Garland, Texas, he joined the US Navy during WWII and served as a Radioman. Through a flip of the coin, Ralph was stationed in Florida where he met his future brother-in-law, George Hedlind. During furlough, Ralph celebrated the Christmas season at the Hedlinds’ home in Oregon, where he met his future wife, Belle Ann Hedlind. Ralph and Belle were married on June 15, 1949.

After graduating from Oregon State University with a Bachelor’s Degree in Agronomy, Ralph worked for the Soil Conservation Service until he retired. He was much-valued by the Department of Agriculture for his intelligent technical assistance to farmers, along with his easy-going charm and unerring eye for detail. After retiring, Ralph rediscovered his love for woodworking. He began making canes out of exotic wood. His work was represented at Portland’s The Real Mother Goose Craft Gallery for over twenty years. One year, Ralph was honored in Willamette Week’s “Best of” edition as “Best Cane Maker.”

Ralph had many wonderful and admirable qualities. He was very generous and enjoyed helping others. He and his wife were devout Christians who loved the Lord and made an effort to instill that love in their children by both word and deed. Ralph’s reputation for honesty and integrity was never questioned and he was much loved and respected by his family and all who knew him.