You are here: Home » On Line Obituary » Richard W. Martini 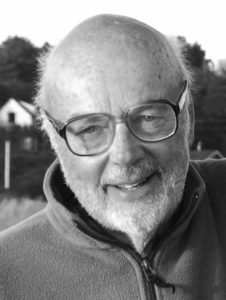 Richard Walter Martini, formerly of Amherst, New Hampshire, passed away on April 18, 2019 in Beaverton, Oregon. He died peacefully at home at age 94 from renal failure and congestive heart disease, in the company of family and caregivers.

Dick was born on August 29, 1924 in Milwaukee, Wisconsin, the son of Walter H. and Lydia H. (Schatner) Martini. Dick was married to Edith M. Compton in Waukesha, Wisconsin on October 12, 1957. They met on a blind date set up by a common friend the winter before, where they played bridge and he drove Edith home on a very cold night in his drafty convertible (with the roof up).
He was preceded in death by his parents, sister Emmy J. (Martini) Meyer in 2016, and wife Edith in 1999. Dick and Edith had two children, twins (double Martinis) Margaret “Peggy” Martini (George Bollweg) of Morton Grove, IL and William R. Martini (Marilyn Jacobson) of Portland, OR, both of whom survive him. Dick is also survived by his two grandchildren, Claire S. Martini of Seattle, WA and Jacob F. Martini of Portland, OR, and several nieces and nephews.

Dick’s parents were first-generation Americans, born shortly after their families emigrated to Milwaukee from Germany in the 1880’s and Lithuania in the 1890’s. Dick’s heritage and upbringing were reflected in his blue eyes, his fondness for bratwurst, sauerkraut, red cabbage, and beer, and a few token German words that he seemed to enjoy mispronouncing.

As a youth, Dick read books, collected stamps, and listened to radio shows with his family. He wore knickers to school and enjoyed family picnics on the dairy farms of his aunts and uncles outside Milwaukee, especially the fried chicken and strawberry shortcake. His mother called him “Dickie” at times. Dick enjoyed playing baseball, football, tennis, and golf. As a boy, he saw Civil War veterans marching in Veterans Day parades. With his family, he saw the Graf Zeppelin over the Chicago World’s Fair (Century of Progress) in 1933. They drove out to New York City for the 1939 World’s Fair. As a teenager, he worked delivering newspapers and was a clerk in a shoe store. One summer, he worked a concession stand at Klode Park on Lake Michigan, alongside his buddy and future brother-in-law Bob Meyer. He was an avid lifelong sports fan, particularly of the Green Bay Packers, who he saw play with his father in Milwaukee in the 1930’s and 1940’s. Dick became a proud Packers shareholder in his 70’s.

Dick graduated from Whitefish Bay High School in 1942. He attended Marquette University for one semester, before interrupting his college education for 3 years of military service during World War II. Dick enlisted in the army at age 18, and served from Feb 1943 to Apr 1946 in the US Army Air Force (AAF), where he was a corporal and trained as a weather forecaster. He was stationed stateside for two years (in Berkeley, CA, and in Victorville, CA in the Mojave desert), then in Europe for one year. He departed for Germany on a troop ship just before V-E Day (fortunate timing), and was stationed in Salzburg, Austria and Wiesbaden, Germany. He saw Dachau, took photos of Munich in ruins, and visited Hitler’s Eagle’s Nest in Berchtesgaden  (“no furniture left, but the view was superb”). At Nordholz (“a godforsaken place north of Bremen”), he heard the British firing off captured German V1 and V2 rockets into the North Sea. In the army, Dick picked up handball, bridge, and a taste for scotch. He credited his army years for pulling him out of his isolated suburban existence and exposing him to the broader world. He considered himself lucky for not having gone through the hardships many vets faced in Europe and the South Pacific.

After returning from Europe, Dick enrolled at the University of Wisconsin at Madison. With the help of the GI Bill, and credit for the year of classes he’d taken at UC Berkeley during the war, he earned a BS in Metallurgical Engineering in 1949.

Prior to his marriage to Edith at age 33, Dick lived at home with his parents in Milwaukee. He enjoyed a pack of friends and life as a bachelor. He enjoyed late-night socializing, bowling, and playing pool, yet showed up reliably at work the next morning. He took regular trips to Colorado, and a road trip to Acapulco.

Dick spent his entire career working as a manufacturing process engineer in metal foundries. Dick spent the first 22 years of his career in various rust-belt industrial cities, beginning at Howard Foundry Co. in Milwaukee, where he finished as Chief Metallurgist. The family moved to Muskegon, MI in 1961, where he became Process Control Manager at MISCO Precision Casting Co. In 1966, Dick and 3 others co-founded Cast Technology Inc. in Schenectady, NY, where he served as Technical Director for 5 years. Finally, in 1971, he joined Hitchiner Manufacturing Co. in Milford, NH, the most bucolic of his outposts. He was hired as Director of the Tech Center, and spent the final 19 years of his career there.

Dick had many interests and hobbies and a quiet wit, and remained good conversational company to the end.

Dick picked up the hobby of model railroading as a boy and participated in it throughout his life, writing articles for magazines and attending national conventions. He was particularly a fan of Colorado’s narrow gauge railroads and the big steam engines of the 1930’s and 1940’s. He bemoaned the passing of the steam era, and encouraged his young children to exclaim “damn diesel” whenever they saw a non-steam locomotive. Edith liked to point out that their honeymoon included many hours spent in the rail yards of the upper Midwest.

As a youth, Dick sang in his church and school choirs , and began a lifelong love of jazz music. Starting in seventh grade, he’d take the streetcar into downtown Milwaukee by himself to sneak into bars to see Fats Waller, Benny Goodman, Artie Shaw, Glenn Miller, Woody Herman, and the Dorseys play. With other GI’s stationed in the desert, he hitchhiked into L.A. to see Bing Crosby and Dinah Shore sing. He saw Oscar Peterson, Art Tatum, Duke Ellington, and others live at various times. Traditional New Orleans-style Dixieland jazz was a favorite and matched his upbeat disposition well.

Dick enjoyed sailing, but only once ever owned a boat himself. In Michigan in the early 1960’s, Dick and a friend co-owned a basic 19’ sailboat, which the family took out on lakes and which terrified his kids.

Dick, Edith, and their 2 kids moved to New Hampshire in 1971, where they formed many dear and lasting friendships over the next 44 years. Dick retired in 1990.

Dick and Edith enjoyed playing bridge with friends in all the places they lived. He and Edith were also able to take many trips together within the US, and to Europe, Mexico, and Australia, before Edith’s death from cancer in 1999, after almost 42 years of marriage. One of Dick and Edith’s fondest memories was their trip in their cramped VW Vanagon, retracing the path Edith’s ancestors took west along the Oregon Trail in the 1840’s. Edith was also able to track down some of Dick’s long-lost Martini cousins in Germany, who they joined for two mini family reunions in the 1980’s. Dick continued to travel after Edith’s death, including to his grandkids’ school graduations.

Dick was an avid reader of books and periodicals, particularly of mysteries and histories. He liked “shooting the breeze” with his buddies (aka “solving the world’s problems”), listening to speakers, and making new acquaintances.

Dick volunteered in town and community organizations in New Hampshire. He served on the boards of the town library, Amherst Historical Society, and Souhegan Nursing Association. He drove for F.I.S.H., and was a member of the Lions Club and AAUW gourmet group. One year, he marched in the Town of Amherst’s 4th of July parade, dressed up as local native Horace Greeley.

In December 2015, following an acute health crisis while visiting his son Bill, Dick resettled permanently in Portland, Oregon. He spent his final three years residing comfortably and safely at the adult care home of his caretakers Cornelia and Pete Popa and their family in Beaverton. With Cornelia’s loving care, Dick was able to regain his health. He got an extra 3+ good years to spend living near family, including his grandchildren. He enjoyed their many meals together, happy-hour explorations, movies, and museum outings. He missed his life and friends in Amherst, but adapted to the unplanned relocation with his typical good nature.

Dick lived in the present and enjoyed each day, taking what comes. He chalked up his longevity to “clean living”, somewhat ironically. He loved simple home cooking and was always appreciative of a good stew, pork tenderloin, baked beans, dry martinis (gin, with a twist), and lemon meringue pie. He maintained a positive disposition and interest in many things, and was always game for a visitor or outing. He had a stack of history books, Economists, and clippings on the table next to his chair the day he died.

Dick’s ashes will be interred next to his wife Edith’s, at Meadow View Cemetery in Amherst, NH. A celebration of Dick’s life will be held at 11:00 am on Saturday, June 29 at the Congregational Church, 11 Church Street, in Amherst. In lieu of flowers, memorial donations may be made to SHARE Outreach Inc. or the Amherst Town Library.