You are here: Home » On Line Obituary » Robert Carl Perry 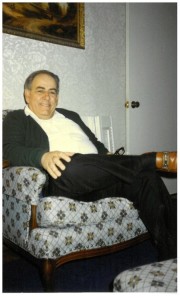 Robert Carl Perry was born on 2 April 1934 in Central Village, Westport, Massachusetts to parents John and Mary Perry. He was the 11th of 12 children in a large Portuguese-Azorean family. After completing an apprenticeship at Brown and Sharpe in Providence Rhode Island in 1953, Bob moved west to California where he eventually landed a job at the California Institute of Technology as an instrument maker. In 1965 he took a job offer from the University of Hawaii and relocated to Honolulu, working directly with Nobel Prize winner Dr. Georg von Bekesy. It was in Hawaii that he met his future wife Kathryn Van Ness of Portland Oregon.   They wed relatively soon after and in 1968 had their first child, a son, Sheldon. In 1969 they moved to Portland Oregon where Bob took a position at Lewis & Clark College. In 1971, daughter Rachel was born. In 1973, the family relocated to Lake Grove. During his many years at Lewis and Clark College, Bob Perry gained a reputation as the one who could build most anything. Among them was a telescope. During the mid 1980’s, he was asked to develop a locking solution that would prevent the theft of computers. This evolved into the present day company known as Securtech. With Securtech, Bob went on to create many products, among which he held 14 patents. He was also fond of fine scale models and had a very large collection of model trains and airplanes. Bob retired in 2008. He passed away on 3 August 2015. Bob is survived by his wife, son, daughter and two grandchildren.